History of the Institute

History of the Institute

In distant 50-x-60-ies started rapid assimilation of Western Siberia. A unique phenomenon not only for Russia, but for the whole world. Berezovo, Šaim, Ust-Balyk… In 1963 g. oil was discovered in the Average Ob. At the same time began the construction of the gas pipeline Igrim-Serov. Geologists searching for new deposits go farther north. Two ideas – creation of the Technical University and the development of the oil and gas industry – heart-wrenching punch their way. The country needed "bright head", qualified specialists, and it means, needed a University, able to prepare. In Giprovuze found, and it turned out, that all existing petroleum universities in the country cannot give the required number of engineers for development of oil and gas exploration field. This decided the fate of the industrial Institute.

4 December 1963 year Tyumen has got its own "Petroleum Institute» – Tyumen industrial. Ныне Тюменский индустриальный университет – one of the largest universities of Western Siberia.

At the beginning of June 1964 year by the order of the industrial Institute Dean of Faculty of oil and gas was appointed Victor Yefimovich Kopylov. First employees got down to business. The worries flew rapidly time. Approached August, and the first entrance exams. The first day of training in new Institute 12 October 1964 year was a real treat.

The Faculty started training engineers in a range of specialties: Geophysics, Geology, well drilling, development of oil and gas fields, design and operation, the construction of gas and oil pipelines, the economy of the oil industry, electrification and automation of mining, automatics and telemechanics, chemical technology of oil and gas processing.

The first and main Faculty Institute asked tone. It is here that included the bands and, main, level approach to training and thinking. Geological, Chemical Department, Department of drilling first hozdogovora conclude with enterprises.

The first student scientific conference, organized by the neftegazopromyslovym Department in April 1967 of the year, aroused great interest. Students were not allowed to plenary and breakout sessions. The Conference demonstrated the search thirst, passion, the seriousness of the students and researchers. But the most senior participants were tret′ekursniki.

In 1964-65 school year teacher NGPF I. Zlenko led radiokružok, and after a few years, students of electrotechnical and neftefaka have created publications. "Gas" became a multiple winner of the Festival "on the keyboards of spring». How many times the uncompromising jury, correspondents, which it is impossible to surprise, not stingy on praises artists faculty: "professionals!», "Wizard!». Мог ли легендарный коллектив «Пилигрим» родиться на каком-либо другом факультете? No! Only NGPF can create this miracle, pokorivšee half Union.

NGPF graduates have drilled the deepest well in our area, seek the highest penetration speed, occupy leading positions and perpetually sought new methods of increasing productivity. Pet production Faculty of AE. Putilov has grown up to the General Director on «» Uraineftegaz "oil production company, He became President of JSC «Rosneft», a member of the Board of Directors Nefteprombanka, Promstroybank, JSC Transneft, (A). In. Deputy Managing Skladčikov OJSC “YUGANSKNEFTEGAZ”. Honorary overseers became a. n.. Janine, VA. Popov and others. Many of the young engineers have formed a scientific schools in the region.

A lot of effort into the development of the Faculty has invested Konstantin Petrovich Putyatin. According to Viktor Kopylova, "the fate of odelila his rare gift – boundless kindness and sincerity. When he was Dean of the Faculty of oil and gas, students perceived Constantine Petrovich not as formal, official. He was much more, than just the Dean».

Beneficial Jet professionalism in research not only special departments and faculty, but throughout the Institute in General, introduced Nicholas M. Olenev-Bogdanov. He came to the Institute in September 1965 year with a solid luggage research and project work. Only for the fifties and sixties it was written about a dozen monographs, recognized for its importance, as from, both at home and abroad (republished in Chinese and Polish languages in Beijing and Warsaw). He worked for some time in China. In 1966 year Nicola St Mikhailovich was elected to the post of Professor of drilling, He was the first Professor of engineering at the Institute of petroleum Affairs. In 1967 year he headed the Department of hydraulics, and later – Department of design of pipelines, oil tanks and tank farms.

With the formation and development of the Department name in the.. Muravlenko. Large Organizer, the famous statesman, "oil King of Siberia», both called it abroad, the position of Professor of Department of in.. Muravlenko worked eleven years. In the early years of his work was organized by students from other universities in Siberia for the accelerated release of petroleum drilling. This issue took place soon, and the first Siberian engineers left in northern area.

Starting with 1965 year one after the other, budding from neftefaka, There were new faculties. And gas remained the largest. Modification of his old chair, growing new. And finally, the development process culminated in the formation of the three specializations: drilling oil and gas wells; technology and complex mechanization of oil and gas fields; oil and gas field machines and equipment.

The first of the oil has 1965 g. Faculty (GRF), the main objective of which was the preparation of engineers-geologists, Geophysicists and geologists to work in Western Siberia. The Faculty quickly got to his feet. Yes, and how could it be otherwise, If the path of its development was illuminated by such stars of geology, as Professor.. Lebedev, corresponding member of Academy of Sciences of Russia and. Nesterov, Professor n. n.. Rostovtsev, Professor m. I. Rudkevich, Professor m. Matusevich, AND.. Kulikov, Professor l. a.. Rogozin.

In the first year of the emergence of GRF close long-term contacts with scientific research Geological Institute ZapSibNIGNI. It is based on it was organized by the Department of geology and exploration of oil and gas deposits., headed by candidate of geological and mineralogical Sciences and.. Nesterov. In 1971 g. из ЗапСибНИГНИ в ТИИ перешли сразу три крупных специалиста: M. I. Rudkevich (d. g-m. n.), appointed head of the Department of oil and gas geology, B. M. Matusevich (to. g-m. n) – the head of the newly organized Department of hydrogeology and engineering geology and. Andreev (to. g-m. n.) – Associate Professor of geophysics.

Started to form scientific geological faculty on a predominantly young (the average age of the 30-35 years) scientists and represented "SPLAV" two biggest scientific geological schools: Tomsk, established in the early twentieth century. a world-renowned scientist, Academician v. a.. Obručevym, and Ural, submitted by scientists of the cities of Sverdlovsk, Perm, Orenburg and other regions.

In 1964 g. General Geology Department were organized (Heads: Professor and.. Lebedev, and with 1979 g. Professor Yu with. Papin) and Department of Mineralogy and petrography (Heads: Professor.. ERMAKOV, and with 1985 on 1995 g. Professor e. a.. Ponomarev). These departments have developed classic geological school. Professor And.. Lebedev made a major contribution to the development of stratigraphy, palaeontology and tectonics of Western Siberia. They laid the foundations of modern stratigraphic scheme of the continental Jurassic and Cretaceous sediments of West Siberian geosineklizy, monografičeski describes the verhnemelovye plants of Western Siberia, Basic collection that is stored in geological and mineralogical museum Tsogu (now TIU).

Research of Professor Yu with. My father's focus on Paleontology and stratigraphy of Paleozoic deposits of Western Siberia (carbon, Perm). They formulated and actively developed at the international level, the new paradigm of natural science – biniologiâ, developed new technology to taxonomic determination of fossils and sedimentary formations of the stratification.

In 1966 g. organized by the Department of geology and exploration of oil and gas deposits.. Founder of the Department is the corresponding member of the USSR ACADEMY of SCIENCES, d. g-m. n., Professor and.. Nesterov – a prominent scientist, made a significant contribution to the study of geology and hydrocarbon potential of Western Siberia. All maps of predictions of oil in Western Siberia are composed with his participation or under his editorship. Professor M. I. Rudkevich, who headed the Chair beside 20 years, tektonist on a speciality, distinguished by the breadth of scientific interests, encyclopedic erudition, the highest intelligence and internal culture. His knowledge he generously handed out surrounding students, graduate students and doctoral candidates. With 1997 g. the Department leads and again.. Nesterov, full force, energy and, as always dogged by all sorts of ideas.

In 1971 g. the CPF was opened Department of hydrogeology and engineering geology (GIG), headed to. -m. n. B. M. Matusevich – now doctor of geological-mineralogical Sciences, Professor, honoured worker of science and technology of Russia. Scientific hydrogeological school all these decades is actively working on the problem of "hydro-geological and engineering-geological conditions of development of the Tyumen region". Feature of this school is constant development along with applied research. Designed by hydrogeological stratification of the West Siberian megabassejna, on the basis of geodynamic highlighted natural water system, Dana first monographic synopsis on geochemistry of groundwaters megabassejna, developed a theoretical model of the geoflûidal′nyh NSA systems, developed other scientific directions of oil-offshore oil and gas search and hydrogeology.

In 1994 g. in the life of a significant event occurred. TII has received the status of the Tyumen State oil and gas University. The establishment of the University, Rector says Karnaukhov N.n., is not a simple change of signboards, This is a new stage in the development of the University. In a market economy changed the system of financing higher education. 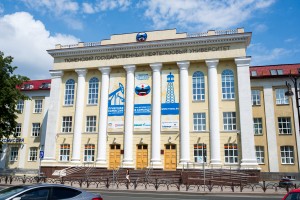 In 1997 g. a significant event happened: CPF-based, ZapSibNIGNI, NIIGiG and NIIGIPR was organized by the Institute of geology and geoinformatics (IGiG). This greatly increased the status of the former geological exploration faculty. Joined the Department of PROMÈKO (Head Professor in n.. Permyakov). Were organized new manufacturing Department: land cadastre (head – Professor a. m. Popov), mining law and subsoil use (head – to. TN, Deputy Chairman of the khmao in.. Karasev); geoinformatics (Head Professor.. Turenko); Geology and geochemistry of combustible minerals (head – Professor a.. Rylko); Earth cryosphere (head – academician of the Russian Academy of Sciences.. Melnikov). Phenomenal event should be considered to be discovery in August of the first academic departments and student of the Academy of Sciences. Opening of specialization "lithology" at the Department of geology and petrography will play a positive role in enhancing research in the polar and Subpolar IGiG Urals.

For example, the best fighter detachment "Neptun" student Yuri Shafranik, He became Chief Executive of Tyumen region, министром и возглавил Минтопэнерго Российской Федерации, with 2002 President of the Council of the Union of oil and gas in Russia, Chairman of the Board of the company "Soyuzneftegaz", a member of the Council of the Union of oil and gas equipment manufacturers. In may 1993 year graduate of the FRG, General Director Sergey Viktorovich YUGANSKNEFTEGAZ Muravlenko became President of the first joint-stock oil company "Yukos", "projecting" the oil strategy and tactics of Russia. Joseph Levinzon Lipat′evič General Director of Association "Purneftegazgeologia", with 1996 on 2005 year – Deputy Governor, Vice-Governor of Yamalo-Nenets Autonomous Okrug, in 2005 year, Advisor to the Chairman of the Federation Council of the Federal Assembly of the Russian Federation, in December 2009 the year he was elected a member of the Board of OJSC NOVATEK. Yuriy Alekseevich Kur′ânov became ceo of OJSC “Tûmenneftegeofizika”; corresponding member of the ACADEMY of NATURAL SCIENCES (1996); honoured worker of the oil and gas industry of RUSSIAN FEDERATION. Vladimir Leonidovich Bogdanov – the Director General of OAO «Surgutneftegas».

(based on the book in e. Kopylova "University, oil and people "and" Chronicle "Tsogu)